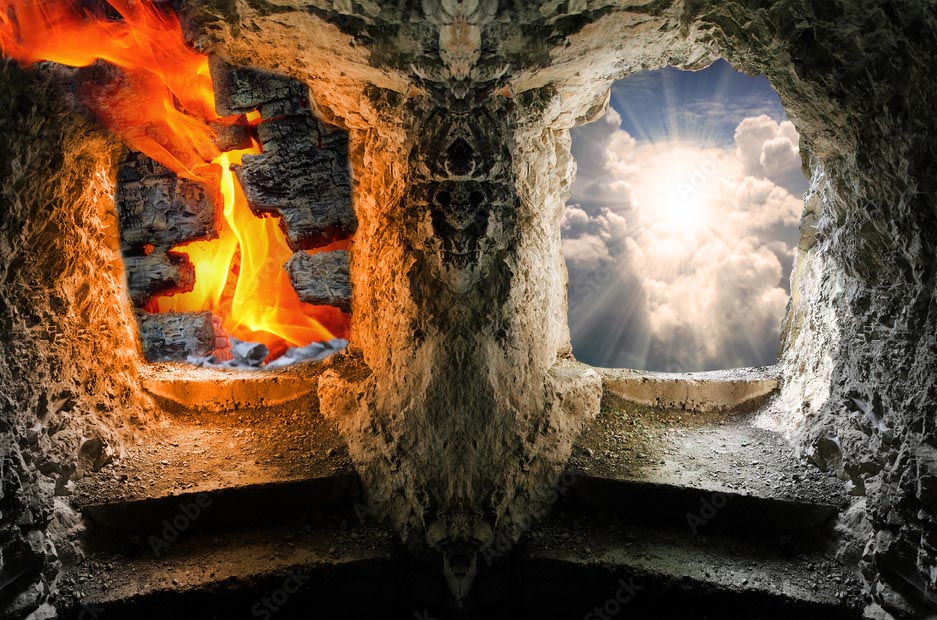 Considering the final eternal destination of our soul is generally well received when describing the glories of heaven. What Christian doesn’t like to imagine walking on streets of gold when returning to their opulent mansion home after attending a feast at Abraham’s house. Thoughts of heavenly citizenship brings great comfort for grief and sorrow when invoked at practically every funeral. As people living in a broken world, we all long to reside in a place of no more pain, tears, or suffering of any kind.

Contemplating hell, however, is a very different story. Eternal damnation is a concept which is generally avoided as being offensive or just basically unpleasant to bring up in conversation. If it’s discussed at all, this locale is spoken of in hushed tones, or as my grandmother wielded it, as a “scared straight” tactic while she directed us as children to draw pictures of fire filled dark caves with demons holding pitchforks.

At the risk of stepping on sensitive toes, let’s take a moment to consider this question, “What is the primary difference between heaven and hell?” Is it the streets of gold, fiery pits, mansions, pitchforks, eating with Elijah, or any other biblically supplied physical description? Or could it be that the essential difference between these two eternal destinations is even more soul impacting than any physical manifestation? Is it possible that there’s anything more important than a wheelbarrow of gold or a fire filled lake?

Instead of physical heaven and hell “stuff,” let’s take a moment to consider that the key distinctive between these the two destinations is whether we’ll exist eternally in the presence of our glorious, wonderous, magnificent, Creator God. Or not. A life without the presence of God is a state of being we currently can’t imagine. Even in this world of sin, decay, and brokenness, the Triune Lord is present and provides common grace to everyone. As Jesus stated during His Sermon on the Mount, “He causes his sun to rise on the evil and the good and sends rain on the righteous and the unrighteous” (Matthew 5:45 NIV). In Luke He stated, “He is kind to the ungrateful and wicked” (Luke 6:35).

However, try and imagine how utterly dark this world be, how meaningless our existence, if the Lord was absent. What benefit would a wheelbarrow full of gold be if we had to live a life without His presence? And couldn’t we endure a fiery pit if Jesus was standing next to us? For a testimonial, ask Shadrach, Meshach, and Abednego.

When Jesus encountered a Roman Centurion’s faith, He made it clear that reward and punishment is founded on the presence of God. “I say to you that many will come from the east and the west and will take their places at the feast with Abraham, Isaac and Jacob in the Kingdom of Heaven. But the subjects of the kingdom will be thrown outside, into the darkness, where there will be weeping and gnashing of teeth” (Matthew 8:11-12).

Paul also spoke to the church about an eternity which would be devoid of God’s presence. “He will punish those who do not know God and do not obey the gospel of our Lord Jesus. They will be punished with everlasting destruction and shut out from the presence of the Lord and from the glory of his might” (2 Thessalonians 1:8-9). A fiery pit is certainly something which should be avoided at all costs, but the thought of an eternity without the hope of ever again experiencing even the smallest divine flicker of light should terrify us into wanting to rescue everyone we ever meet.

But OHHHH, how indescribable a thought of spending an eternity in the presence and warm light of our loving Creator and Redeemer. A popular song released by Mercy Me in 1999, “I Can Only Imagine,” provoked us to consider how we would pour ourselves out before God when we first see Him. Now take the thought of this first encounter and multiply it by an infinite number of days. As Jesus promised His followers, “My Father’s house has many rooms; if that were not so, would I have told you that I am going there to prepare a place for you? And if I go and prepare a place for you, I will come back and take you to be with Me that you also may be where I am” (John 14:2-3).

The Apostle Paul wrote of looking forward to his own eternal fellowship with Jesus, “I desire to depart and be with Christ (Philippians 1:23).” What Paul didn’t say was that he was looking forward to his mansion home across the street from Moses on Golden Lane. To live eternally with our Creator or to never again feel His presence is the central choice of our life. The thought of talking to Him, touching His healing hands, seeing the glow of His face, and feeling His loving embrace echoing warmth through our deepest inner core for an eternity, what could possibly be better than that?

May the Lord remember us in His Kingdom.