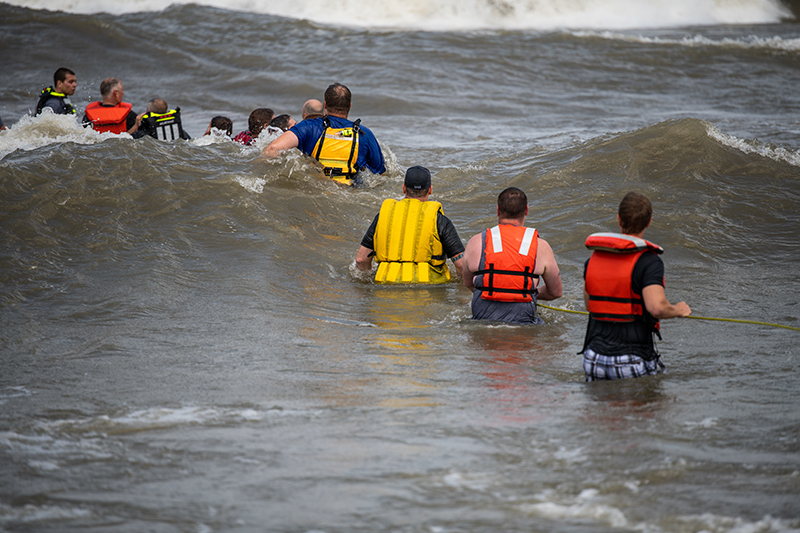 As countless overheated people do every year, in July 2017, Bryan and Roberta Ursrey loaded their three kids, a nephew, and Roberta’s mother Barbara, and drove to the beach in Panama City to enjoy the water and waves.
Toward the end of the day, Roberta, curious as to where her boys Noah and Stephen (then 11, and 8 years old) had gotten off to, headed down the beach to look for them. Before long, she heard her sons’ frantic calls for help as they were far out in the water. Stephen and Noah were caught in a strong rip tide that was taking them farther away from shore. “They were screaming and crying that they were stuck and they couldn’t go nowhere,” Ursrey eventually explained to a reporter.
In a panic, Bryan, Roberta and Barbara ran into the water attempting to reach and rescue the kids. Due to the strength of the rip tide, however, they too became trapped and were being pulled away. A tragedy was clearly about to happen.
But this story has an amazing and happy ending, because among the beachgoers that day were Derek and Jessica Simmons – an ordinary couple enjoying a picnic dinner together. When the Simmonses’ attention was first drawn to the commotion, they initially thought people had spotted a shark. Looking closer, they saw heads bobbing far out in the water and heard the shouts for help. Realizing what was happening, Derek and Jessica jumped into action. “Form a human chain!” they began to shout to the onlookers on the beach. “Don’t just stand there!” Derek recalls yelling to the gawking crowd. “There’s got to be some hope left for humanity in…you.”
Their orders sparked action. Bystanders became participants. Spectators got involved. After the fact, Jessica Simmons recalled, “It started with five people, then there were 15, and then it got bigger and bigger and people were just coming in. It was amazing.”
One by one, person after person cautiously waded out into the surf, linked arms, and eventually formed a chain of nearly 80 people that ultimately saved a family of complete strangers from drowning.
My friends, while the scene looks different from the story I’ve just shared with you, there are countless thousands of people in each of our communities and neighborhoods who, for one reason or another, are caught in the grip of a far stronger current. One that doesn’t merely threaten their physical life but, more importantly, their eternal one. What’s being done to save them? Are we part of the onlooking crowd figuratively standing safely on the beach shaking our heads and wringing our hands as we watch the disaster unfold, or does the crisis of souls in danger spur us to organize an effort to reach and rescue those being pulled farther and farther away?
You may find it interesting to know that God Himself has weighed in on this very matter, offering His view on what should happen:

Rescue the perishing;
don’t hesitate to step in and help.
If you say, “Hey, that’s none of my business,”
will that get you off the hook?
Someone is watching you closely, you know—
Someone not impressed with weak excuses.
Proverbs 24:11-12 (MSG)

This is the idea behind this new publication. In the editions to come, we intend to share ideas, tell stories, and point to examples where believers — Salvationists or otherwise — are actively engaging in spiritual “search and rescue” work. There is an axiom that says you get more of what you focus on. Our goal is to focus on soul-saving in the hope of seeing more of it — lots more of it.
As Salvationists, such activities and exploits were once our stock-in-trade. It’s what we were known for and, more to the point, what we were exceptionally good at. Ordinary people who themselves had once been saved from the pull of sin’s current would then turn around and launch out in search of others who needed saving.
In the same way that, unless intentionally kept hot, it is the tendency of something that is burning to cool down. Sadly, there is evidence that our once celebrated (sometimes ridiculed) zeal for the salvation of souls has lost some of its fervor over time. I’m not sure why it is or how it happened, but it seems that somewhere along the way a number of Salvationists have let go, lost, or forgotten what was radical about our faith and our mission — the burning, passionate, do-whatever-it-takes enthusiasm to reach the lost. For some, it has been replaced with something more “churchy” and less concerned about those in spiritual danger. What I’m describing certainly wasn’t an “all at once” sort of thing — like an event or decision you could circle on a calendar as the day something started or ended. Instead, it happened gradually, incrementally over time.
Call this shift whatever you’d like, but it is not the attitude of a true Blood-and-Fire Salvationist!
While he was General, Bramwell Booth explained, “A man may be a good Catholic, or a good Presbyterian, or a good Methodist without being in any way pledged or bound to devote himself to the salvation of his fellows. But without that ambition, no man can be a good Salvationist.”
The simple fact is that we will never fulfill our mission by staying in our comfort zone within the climate-controlled interior of our corps halls and chapels. Instead, let’s go out, gather others around us, link arms, wade out from the safety of the shore, and reach those who’re in danger of being lost forever.
This is the very encouragement Robert Johnson was spreading among Salvationists when he wrote this early Army battle song that we still sing today:

Sit no longer idly by
While the heedless millions die,
Lift the bloodstained banner high
And take the field for Jesus.
The Song Book of The Salvation Army #980 vs. 1

Can I point to an uncomfortable truth? At the end of the day, simply singing about saving others winds up saving no one.
So what will you do, friends? The time is growing shorter and the tide is pulling more and more away from the shore. Let’s set song books aside, dive in, cast off, and push out leaving comfort and safety behind us. Be the Salvationists we were called to be.