Storming the Forts in Fort Myers

“Tonight a servant of the Lord, a warrior on the Nightwatch team, offered his shoes from his own feet to a man named Nahal. It was no accident that we came into contact with this man as we were not even going to stop at this specific location tonight – but as always – God provides for His sheep” (Facebook post on the Ft. Myers Corps page). This incident typifies the spirit and sense of mission that embodies the Ft. Myers Corps: doing what needs to be done to reach people for Jesus Christ.

Located on the Gulf Coast in southern Florida, the city of Ft. Myers not only boasts a beautiful seashore but is close to the Everglades making it a leading tourist destination. The command serves the tri-county area of Lee, Hendry and Glades counties that between them have a population of close to a million people. In that million are a wide range of people from transplanted northerners to Florida natives to winter “snowbirds.” The economy of Lee County, where the corps is located, is healthy while the economy of Hendry and Glades counties face long term issues of generational poverty and all that goes with it.

The social services of the command are impressive: homeless housing for men, women and families, state and federal pre-release, a medical clinic, a mobile homeless feeding program called Nightwatch, transitional housing, an established feeding program, home delivery of meals for the elderly, and emergency family assistance that includes help with rent, food, utilities as well as other needs.

A strong expression of Salvationism for many years, the corps is as diverse as any in the Southern Territory serving a wide range of ages, races and ethnicities as well as first generation and multiple generation Salvationists. What is particularly notable is the intentional efforts to bridge social service clients to the corps. The results have been remarkable. 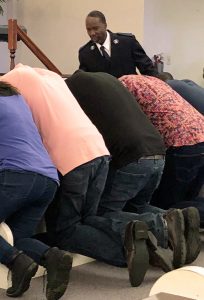 Tim Green, who struggled with substance abuse issues, found a new beginning at The Salvation Army. “Through The Salvation Army I made up my mind that I wanted freedom,” he recalled, “Free from the roller coaster ride, from the in and out.” He found that through the Army programs. Having a profound salvation experience, he immediately asked, “Okay. I’m saved. What’s next?” What’s next was an increasing involvement in the corps that swept his wife and children in – not that they were enthusiastic at first. “They thought I was crazy.” His extended family thought so as well until they saw the change in Tim. With that, they gave him their full support.

Others were drawn to the Army because it was a place where they could engage in front line mission. Sarah Clarke, the daughter of Salvation Army officers, with her husband Jeff are pioneering a work in the neighboring city of Bonita Springs. Following that city’s devastation by Hurricane Irma in 2017, the Army mobilized to meet the need. But it was seen that longer term work needed to be done so Majors Tim and Cheryl Gilliam, then the area commanders, dispatched Sarah and Jeff to address it. Serving for a time in terribly cramped quarters, they eventually found better accommodations at a former dental office. It is here that they not only dispensed hope in the way of material assistance but in spiritual assistance as well. Until the virus, they were meeting weekly for a Bible study that was slowly but steadily growing until now the work is designated as a mission station. At some point, a more intentional work will be done to pioneer a corps in this thriving community. In speaking about what is happening, Sarah summed it up by saying, “We want to people to see what God is doing because it’s really cool.” 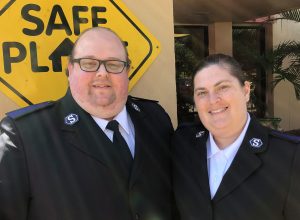 Another couple, Shawn and Keri Langford, have spearheaded the Nightwatch ministry. Using the emergency canteen, they roll out in the evening hours seeking the homeless and the hungry. Their approach is simple. Shawn explained, “We get out of our vehicles and start walking around and talking to them… just having a conversation with them.” With the sandwiches they serve, prayers are offered. Keri shared, “Sometimes people just need a prayer because they’ve had a rough week. Others want to know what programs or shelter we can offer. We invite people to join us in worship as well. Some have attended the corps.”

Heading the Army work is the dynamic team of Majors Carlyle and Charlotte Gargis, assisted by Lt. Sarah Nance. Talking to any one of these will leave no doubt about their sense of mission. Major Carlyle shared,“It’s in our (officer) covenant: ‘to live to win souls’. Our heart’s desire is to lead men, women, boys and girls to know Jesus Christ as Lord and Savior. We labor at that joyfully, reaching out each and every day. God has really opened up some amazing opportunities.”

As elsewhere, the pandemic has made a huge impact. The corps already was broadcasting its Sunday morning service via Facebook with live attendances hovering around 200 on Sunday morning. The Sunday school classes fill almost every nook and cranny of the building. There is a strong music program and an energetic and well attended youth program. Soldiership classes are held regularly resulting in a steady stream of first generation Salvationists who boldly share their witness and proudly don the Army uniform. Quite naturally, all of this has been impacted and while some in person meetings have resumed, many are still reluctant to attend in person.

In whatever form the mission takes, Gargis is clear about the future. “We need to take the light of Jesus into some dark places that desperately need His light. I hope to raise a group of warriors willing to go into those dark places with God’s love and with His light to bring hope where there seems to be very little hope.”

Dear Lord, make it so.

We are blessed as soldiers in The Salvation Army that there is a new emphasis by our international and territorial leaders to empower us to move the mission forward in this great organization.