Vision for the Lost or Lost Vision? 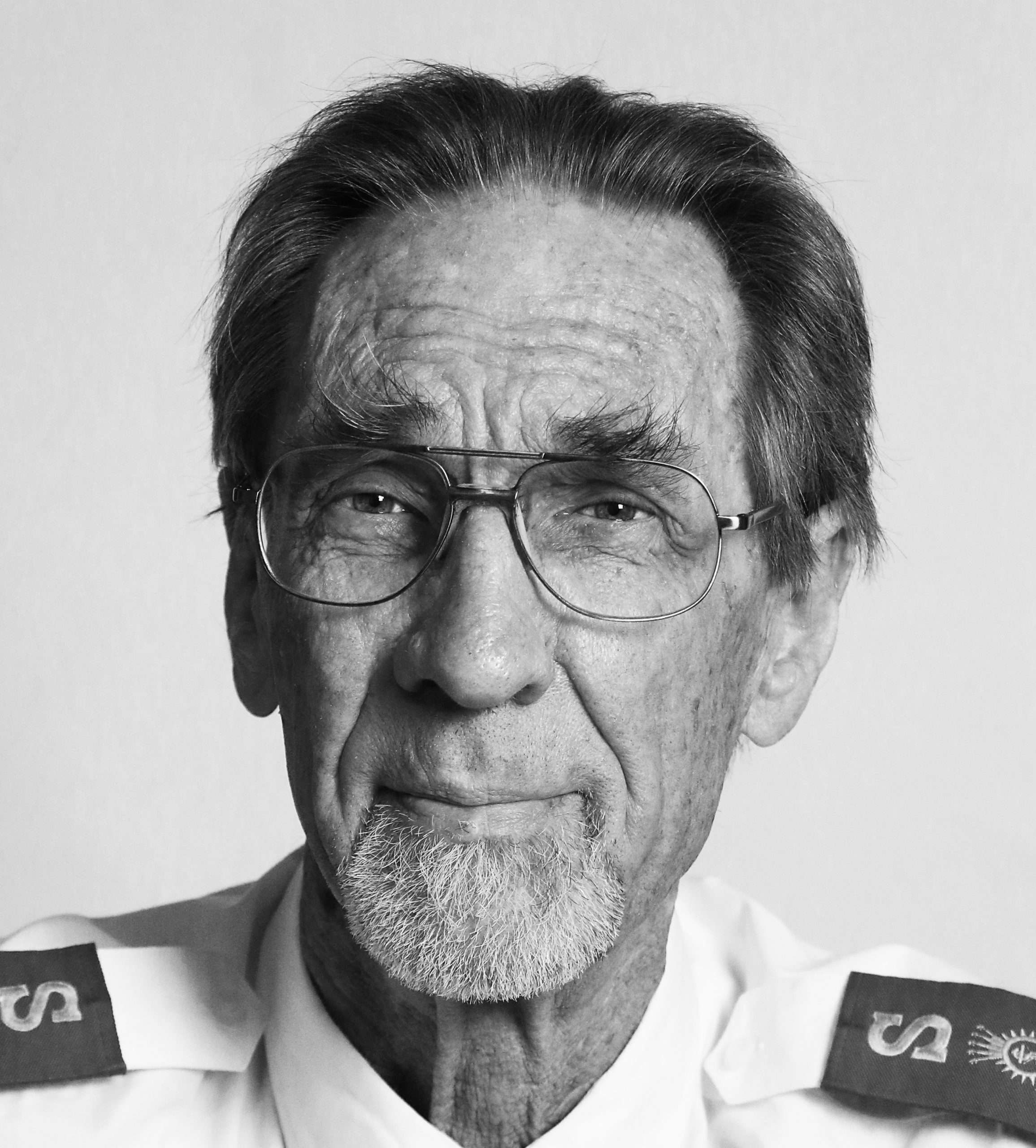 When William Booth burst in the door of his home late one night in 1865 and exclaimed to wife Catherine, “Darling, I have found my destiny!” he’d been walking through the slums of the East End of London.

That glimpse of hell on earth constituted Booth’s primary vision: hell was the East End writ large and forever.

In fact, Booth believed, “If you were to take hell out of our doctrine, The Salvation Army would soon disappear.”

What was Booth’s vision?

Booth was fond of vision imagery, even collecting a series of articles in one volume entitled Visions in 1906. Perhaps the most well known of these says (in abridged form):

I saw a dark and stormy ocean. … In that ocean I thought I saw myriads of poor human beings plunging and floating, shouting and shrieking, cursing and struggling and drowning; and as they cursed and screamed, they rose and shrieked again, and then some sank to rise no more.

And I saw out of this dark angry ocean, a mighty rock that rose up with its summit towering high above the black clouds that overhung the stormy sea. And all around the base of this great rock, I saw a vast platform. Onto this platform, I saw with delight a number of the poor struggling, drowning wretches continually climbing out of the angry ocean. And I saw that a few of those who were already safe on the platform were helping the poor creatures still in the angry waters to reach the place of safety …

As I looked on, I saw that the occupants of that platform were quite a mixed company. … But only a very few of them seemed to make it their business to get the people out of the sea. … though all had been rescued at one time or another from the ocean, nearly everyone seemed to have forgotten all about it. … These people did not seem to have any care—that is, any agonizing care—about the poor perishing ones who were struggling and drowning before their eyes…

To serve this vision of reaching the lost with the message of salvation, The Salvation Army was called into existence.

There was a further vision. Acts of mercy and service were part of Booth’s Wesleyan Methodist DNA and long featured in the Christian Mission’s agenda (‘The Christian Mission’ later became ‘The Salvation Army’). But from the late 1880s, Booth was persuaded that the social deprivation The Salvation Army was encountering made it too difficult for many people to hear and understand the message of salvation. He decided he had to do something about hell on earth as well as hell hereafter.

Although the Army was already engaged in social action, Booth came to see the need for more fences at the tops of cliffs as well as more ambulances at the bottom. Sometimes he even tried to do something about levelling the cliffs themselves. He saw that society, as well as the individuals comprising it, needed to be saved.

And so, Booth described another, extended vision. An example of this reported by Alex Nicol in General Booth and The Salvation Army said he saw such things as homes for the detention of the homeless, transportation agencies for moving slum dwellers from one part of the world to another, inebriates homes for those who drink ‘distilled damnation in the shape of intoxicants’, land colonies evolving into salvation cities, orphanages becoming villages, reformatories made into veritable paradises, and a salvation citadel in every village, town and city.

What was Booth’s guiding vision? He wanted to help people avoid hell. But by late in Booth’s life his vision encompassed salvation of this world as well.

Can we see Booth’s vision today?

Does what we now see in The Salvation Army look like Booth’s vision? How about saving people from hell?

An early day Salvationist was an uncomfortable person with whom to share a railway compartment. You would be ear bashed about salvation. Today, many are more anxious to demonstrate our inoffensive normality. That many Salvationists are less motivated to engage in personal evangelism possibly indicates a slackening commitment to the doctrines underlying such activity. A diminished conviction that our neighbor is going to hell renders us less inclined to risk offence by trying to save him or her from it.

This is not to say modern Salvationists do not believe or that sinners are no longer brought to salvation by our witness—they are. But Booth would probably consider some of us to be people “who do not seem to have any care—that is, any agonizing care”—for the lost.

What of Booth’s other vision for society’s salvation? World over, battalions of Salvationists and employees engage in alleviating social distress. Sometimes they not only attend to the consequences of social evil but engage with its structural causes. For many years, this last activity was understated because of the increasing social conservatism of the Army’s constituency and a fear of things “political.” In recent years it has received more prominence.

Booth’s commitment to a scheme of “social salvation,” as detailed in his treatise In Darkest England and the Way Out. was intended to support and complement, not replace, his commitment to “spiritual salvation” for the next life. And Booth did hold fears that such social service could become an end in itself.

Today, many of those working for the Army in this field are not Salvationists. They need not be Christians and may not be in sympathy with the Christian aspect of our mission. In 2004, some New York employees sued the Army for insisting on a Christian emphasis, claiming that “when The Salvation Army’s religious mission was made mandatory in our workplace, it changed the climate in a way that caused us fear and concern about our ability to ethically deliver services.”

Although Salvation Army leaders have always been reluctant to allow donors, government or private, to determine our policies and values, we cannot entirely resist the bait of those assiduously cultivated funds. Booth said he would take money from the devil himself and wash it in the tears of the widows and orphans—but the devil usually has his terms.

There is a strong argument that our mission must be holistic, not confined to “saving souls,” and that even giving a cup of water in Jesus’ name contributes to the salvation of the world, but would Booth be entirely satisfied that his vision is being embodied in all we now do?

Have we lost the vision?

Has the evangelical imperative of The Salvation Army’s vision become diluted? And if we have lost the salvation vision, how did that happen?

We idealize our early years as a time of exponential growth, but statistically, the Australasian flood tide peaked by 1900. In barely a generation, the initial energy had begun to dissipate, the vision begun to fade.

H. Richard Niebuhr, writing in Social Sources of Denominational-ism, echoed Luther when he said, “By its very nature, the sectarian type of organization is valid for only one generation … Rarely does a second generation hold the convictions it has inherited with a fervor equal to that of its fathers, who fashioned these convictions in the heat of conflict and at the risk of martyrdom.”

The Salvation Army children and grandchildren of those who experienced the miracle of radical conversions did not necessarily enjoy the same kind of experience themselves. They grew up within the world of The Salvation Army. It was their familiar sub-culture, but they did not necessarily inherit the evangelical imperative. Many found the sub-culture restrictive and began to slip away.

This is a perfectly normal and natural occurrence. Renewal movements initiated by charismatic leadership always institutionalize and decline. Sometimes they break out again in renewed vigor. This has happened within the Christian Church many times since the original ‘Jesus movement’ that shook the institutionalized religion of first century Judaea. The Monastics, the Mendicant Friars and late medieval movements, the radical Reformers, the Methodists and the Pentecostals all illustrate the seemingly inexorable progression of the seasons of divine inspiration and human endeavor.

Radical religious movements tend to arise in eras of rapid change and transition, of chaos to which they are, in part, a response. Because such periods often involve social and economic dislocation, these movements are also often marked by concern for the poor or identified with the poor. As Johan Metz put it:

(Religious orders/congregations) are a kind of shock therapy … for the Church as a whole. Against the dangerous accommodations and questionable compromises that the Church … can always incline to, they press for the uncompromising nature of the Gospel and the imitation of Christ …

We fit the template. The Salvation Army emerged in the late 19th century as the latest body of enthusiasts, those Max Weber called “the virtuosi,” the dazzlingly skilled, the spiritual athletes. The Army was widely recognized as a de facto new religious order within the Church. The poet Francis Thompson in an essay on “Catholics in Darkest England” wrote, “Consider what the Salvation Army is. It is not merely a sect; it is virtually a Religious Order.”

But, as Gerald Arbuckle cautions about Catholic Orders:

Historically, once these movements cease to be prophetic, though in Church law they may remain religious congregations, they are no longer authentically religious. By sinking to the level of purely human institutions, they have lost their reason for being.

The Army fitted this template also. Booth knew it was changing even in his day. Here he is in 1902:

(Many) … officers are trying to do The Salvation Army without salvation—at any rate, with very little; trying to exemplify the principles of the most wonderful religious organization that the world has ever seen with very little religion. They get into a formal or legal way of doing things and go on doing them without any results or with very little results because the life and heat, and fire and passion are burned out or almost out.

So, in 1904, Booth described another vision, for a new Order of officers. He wrote (again, I abbreviate):

I thought … I saw a new body of officers suddenly start into existence … they appeared to manifest extraordinary signs of earnestness, self-denial, and singleness of purpose; indeed … a reckless, daredevil set … facing opposition and difficulties with meekness, patience, and love … speaking to the people in the streets … wherever they had opportunity, about death, judgment, eternity, repentance, Christ and salvation …

Booth was describing officers as he had expected them to be 25 years earlier, but clearly recognized they were no longer. He didn’t admit his troops were now too burdened with canvassing for funds, reporting statistics and managing the already saved—activities naturally associated with the institutionalizing of his vision—but he knew he now needed a new Order. Had he been 50 years younger, he would have founded it himself! But Booth didn’t, and his ‘old’ Order is now 100 years older.

It will be obvious that I’m speaking of the Army in the West. The present surge of growth the Army enjoys in the developing world appears to parallel the Army’s early days.

It’s the decline in the West with which I’m concerned here. How did it happen? Quite naturally and humanly, and for reasons as much sociological as spiritual. What now? Can this vision be refounded?

← How Others Do It: Leading the Way Sharing Our Faith →

But free will is both one of the greatest gifts of God and the greatest curses. With free will there are consequences as sure as throwing a stone in a pond causes ripples to go forth.

END_OF_DOCUMENT_TOKEN_TO_BE_REPLACED

“I couldn’t get enough,” Matthew exclaims, “and the more I learned about God’s Word, the more healing I experienced.”

END_OF_DOCUMENT_TOKEN_TO_BE_REPLACED

It has long thrilled me that holiness is one of our distinctives in The Salvation Army. Underpinned by 1 Thessalonians 5:23, the tenth doctrine in our Articles of Faith states: “We believe that it is the privilege of all believers to be wholly sanctified, and that...