Zimbabwe is a landlocked country located in Southern Africa, sharing borders with South Africa, Zambia, Botswana, and Mozambique. Eighty percent of the population is Christian.

A third generation Salvationist, I was born and bred in Zimbabwe. The Salvation Army is one of the fastest growing churches in Zimbabwe. The Zimbabwe and Botswana Territory has over 159,000 soldiers and adherents. 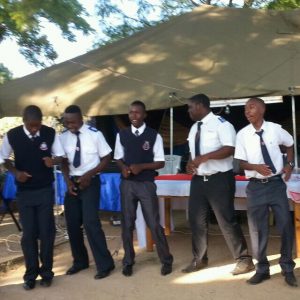 It is hard to compartmentalize being a Christian because it is a way of life. Life is hard in Zimbabwe and a lot of people survive because of their faith in God. The Salvation Army helps and evangelizes the people through its programs at the corps. Growing up in the the Army in Zimbabwe, I went to the citadel most days during the week. I expected to spend the whole day in church on Sunday. Prayer meeting started at 6 am, a time for prayer warriors. At 8 am Sunday school started, for the youngest to the oldest youth in six classes. At 10 am, the Holiness Meeting started. After Sunday School, most children went home to eat and get ready for open air at 1 pm. I miss open air when most soldiers marched and sang from the corps to the middle of a busy shopping area. It is a short program because it is hard to get the attention of people at the shopping center. Some people stopped and watched. Open air, includes songs, God’s Word and before the closing song, the preacher always invites those who are listening to join the congregation as we march back to the corps. Once the open air is done, the soldiers and adherents march and sing back to the corps.

At 2 pm, the Salvation Meeting starts. This is one of my favorite. During the week, a lot of groups practice items to perform during the meeting. This service is normally two hours long, and full. There is a time for Senior Songsters, Youth Songsters, Timbrels, hosho (a Zimbabwean musical instrument), drama, and so on. This is the time soldiers and adherents allow God to use them through their talents. During the Salvation Meeting, it is very rare for someone to leave the church at the end without having moved a muscle through dance. If you ever want to experience the Zimbabwe way of worshipping the Lord, attend this meeting. Of course, there is time for the Word.

The Salvation Army in Zimbabwe evangelizes through many programs. On Wednesday, there is a prayer meeting that is done in homes. If there is a family that is going through a tough time, whether it is sickness or other troubles, the prayer team meets at that family’s house. 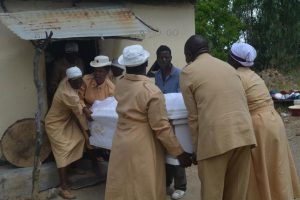 One of the many things I appreciated about the Zimbabwean culture is that when death arrives, you are not alone. If you are a soldier or adherent, The Salvation Army works with the family to help at the funeral. When a family member dies, the church members start collecting chema (money for a funeral) and any items that can be used to feed hundreds of mourners.  Before COVID-19, the burial took place on the third day. Church members, neighbors, and relatives gathered for the family day and night. There is a time for singing and God’s message.  During those few days, you are not alone with someone always to hold you and be there for you. Even after, the burial, people come and check on you.

Evangelism in Zimbabwe is a way of life. Maybe during the open air, people intentionally go out to the shopping center to invite others to church. What I mean is that The Salvation Army announces the gospel through its way of life. When kids are orphaned or someone is in the hospital, the League of Mercy is there. When some of the youth are getting in trouble, the youth program is there, whether they are learning how to play instruments, sing, and/or empowerment programs. Being in the church is being part of the family. The church knows everything about you and the neighborhood. There are always open arms whenever anyone needs help. During the pandemic, The Salvation Army Chinhoyi Citadel started a Porridge Program, cooking hot porridge and giving it to kids in the neighborhood who were hungry.

There is a program for everyone. The Women’s Ministry teaches women how to care for their families including practical things like sewing, cooking, and so on. The Men’s Ministry is also active.

I am proud to be a Salvationist from Zimbabwe. If you have never been there, I encourage you to put it on your bucket list. 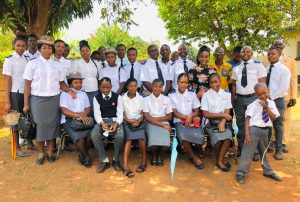 ← ‘Perfect Storm’ Ushers Amazing Turnaround In Jackson, TN How Others Do It - The Billy Graham Evangelistic Association →