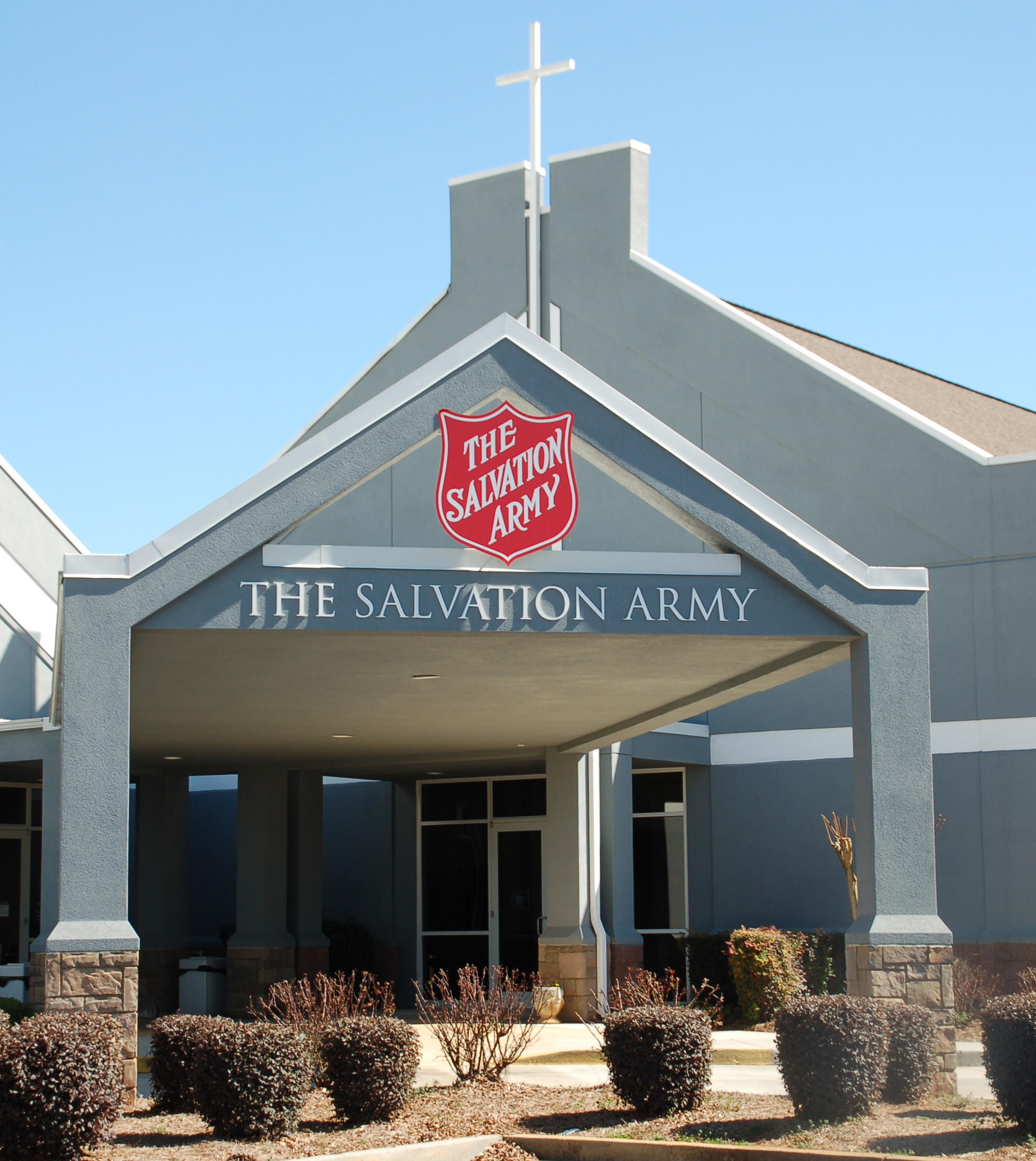 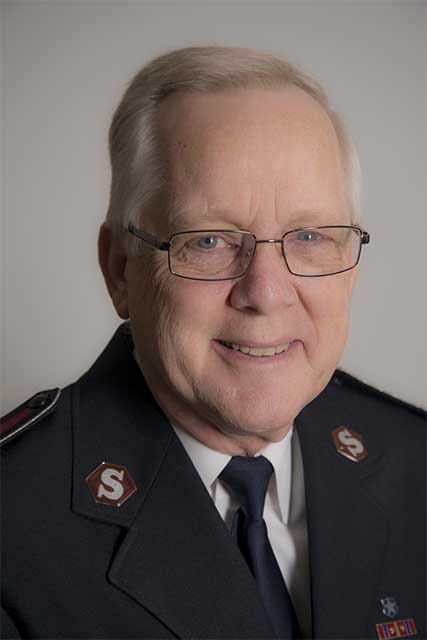 What would be highly inappropriate prior to the days of COVID now indicates the innovative spirit of the Gwinnett County (Georgia) Corps. Captain Paul Ryerson, in the middle of the meeting can be found staring at his phone that is open to Facebook, occasionally tapping away a message to someone somewhere out there.

The Gwinnett County Corps is located in the Greater Atlanta area. The county boasts nearly one million people in one of the most rapidly growing counties in the state. The Salvation Army has been an active part of the community since 1985. Expanding steadily since opening fire, the corps now hosts not only a traditional English-speaking congregation but both Korean and Hispanic worshipping and serving communities. Its social service outreach engages the soldiers as well as numerous volunteers. Under the leadership of the previous corps officers, Captains Jeremy and Kristina Mockabee, one of the first online ministries in the Southern Territory was started several years ago that positioned the corps advantageously when the COVID shutdown occurred. The current officer team, led by Captains Paul and Analese Ryerson, includes Captains Minkee and Eynhye (Grace) Kim for the Korean ministry and Nelson and Ivette Colon-Cartagena, a soldier couple who spearhead the Hispanic work. They are supplemented by highly engaged soldiers and local officers, including CSM Jeremy Rowland who currently serves as the Territorial Sergeant-Major. 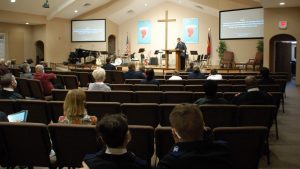 Although many things can be highlighted, the headliner currently is the booming online ministry that has advanced the outreach of the corps. Envisioned first to reach the local community, it now spans continents and multiple countries. Even with the corps’ head start, there were still lessons to be learned and limitations that soon materialized. With three meetings all happening on Sunday morning, there is currently not enough quality video and audio equipment to go around although plans are being made to remedy that.

Using primarily YouTube and Facebook, the combined numbers of the three ministries reveals that each week on average almost 3000 views are logged, with special Sundays seeing that number skyrocket. In the English service, in addition to what Captain Ryerson is able to do personally, soldiers are assigned to interact with people viewing the meetings live. This is especially important during the altar call that is occurring in the in-person services allowing those viewing online to ask for prayer or record a decision they have made for Christ. Reflecting both on the in person and online ministries of the corps, Ryerson remarked, “This online ministry is reflective of how well The Salvation Army mission is part of every single soldier’s DNA. We evaluate every program by asking, ‘Is this bringing someone to Jesus? If not, why not? Where is the bridge? Where is the connect?”

The connection for the English-speaking congregation not only includes the neighborhoods of Gwinnett and surrounding counties, but worldwide. Ryerson shared, “We are seeing people tune in live from different parts of the world weekly, no matter what their time zone is. Some have begun sending their tithes in (through electronic giving). Some overseas people have indicated that they have made our corps their church home. That has led us to discuss how these ‘attenders’ might somehow become soldiers. Is soldiership only for those who can attend in person or does it include those who have become a part of us virtually? How do we draw the live congregations and the online congregations closer together?”

The multi-cultural nature of the Gwinnett County Corps is not only seen in its ethnic ministries in other languages but the diversity within each congregation. The Kims have seen their outreach go beyond Koreans to other Asians as well. The Colons have watched theirs span Mexican, Columbian, Venezuelan, Guatemalan, Puerto Rican and Nicaraguan, each with its own nuances of culture and use of the Spanish language. And the English congregation spans not only those from North America but a healthy Caribbean presence as well. 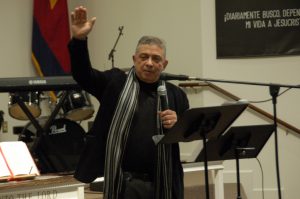 The first intentional outreach beyond the traditional corps was to Hispanics, launched nearly 20 years ago. For a while, a bi-lingual service was used but this proved to be unwieldy, so the meeting evolved to be solely in Spanish.

The Latino population continues to increase dramatically. According to the most recent census information it now accounts for 25% of those living in the county. That is encouraging to the Colons. But there are still pronounced challenges for building the Hispanic work.

Nelson Colon said, “The Hispanic population is comprised of two different kinds of people. Those who are settled and those who move around. We have watched many become active but then move on. We build the ministry around those who are settled.” Another issue is that a significant number have issues with being undocumented, which contributes to the transitory nature of some Hispanics. If a person is undocumented, it limits their opportunities within the Army. For example, undocumented people cannot enter the training college to become officers.

“A further hurdle for many of our people is that they have been raised in the Catholic faith. The idea of salvation being free and not the result of works is difficult for some to grasp.” Colon shared. “Some also come from cultures where superstition is very strong. It takes some effort to help them work through these issues.”

What has been extremely encouraging is the response to the Hispanic online ministry. Hosting its own Facebook page (Amigos Lawrenceville), the ministry has used this as the primary online outreach. Its statistics even rival or at times outpace the English-speaking congregation, peaking at 7500 views for one broadcast. The outreach continues to spread.

A further appeal has been the Army’s practical social service ministry which speaks to a population that often faces significant economic issues. This, combined with the other aspects of Army ministry translates to a bright future for a growing work.

In operation for around 15 years, the Korean ministry benefits from having Korean officers heading the work. Most attending are first or 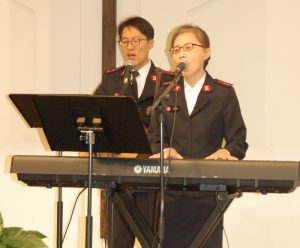 second generation immigrants from South Korea. Christianity has made significant advances there so that Christians now outnumber Buddhists, Buddhism having been the traditional religion of the Korean people. Most of those who emigrate to the United States are Christians which has fueled an explosion of Korean language churches, businesses, schools and cultural expressions not only in Gwinnett County but through the United States.

One of the big outreaches before COVID had been a Saturday school that included instruction in the Korean culture, Bible lessons and Korean Christian music. “We are planning to start a Bible Sunday school through Zoom,” Captain Grace shared, “but one of our outreaches that was working before were open-airs in front of Asian grocery stores. We had to stop those.”

While seeing an uptick in their online viewership, the Korean ministry has not seen the dramatic increase seen in the English and Hispanic ministries. At this point they are only using YouTube, which limits their reach. In addition, although the corps’ English meetings were broadcast online before the pandemic, the Korean meetings were not. It has been a steeper learning curve further complicated with having to use limited equipment to record to share the meetings.

As the pandemic eases, the Kims hope to see the ministry regain some of the lost footing. Even with that, there remain barriers for the ministry to reach the Korean community. A long-range study done a few years ago indicated that the best location for a Korean corps was in the community of Suwanee, a 40 minute drive from the present corps building. “Many of the Korean people visit but do not continue because of the driving distance,” Captain Minkee Kim said, “We hope that eventually we will be able to see the Army expand with a building nearer to the area where most of our Korean population lives.”

The corps building on Sugar Loaf Parkway is like a home housing three different families. That can be uncomfortable at times, but all the ministry leaders affirmed that they enjoyed the opportunities to fellowship and share with each other. The corps has regularly had united events, at least quarterly, when all three congregations joined together. Easter has been one of these although it was missed last year due to pandemic restrictions. Youth activities combine children and teens together from all three ministries, creating strong bonds, understanding and support.

All have indicated their appreciation for and enjoyment of the different cultural expressions and their unity of purpose in winning people to Christ. There is a genuine effort to understand the needs each group has and to cooperate in getting things done.

It is this spirit of love and support that has positioned the Gwinnett County Corps for what is now its global outreach. The corps had already established a desire to reach all peoples without demanding that they abandon their languages or cultures to join the Army. It is a model of not just how a Salvation Army corps should work but how the Kingdom of God properly functions.

The Apostle Paul’s heart would have been warmed if he could have seen the corps. He reminded the Galatians, “There is neither Jew nor Gentile, neither slave nor free, nor is there male and female, for you are all one in Christ Jesus” (3:28).

← Come On In I Only Preach on Hell to Christians →